Choosing DJ’s for DSD is by no means an easy job. Being a huge fan of dance music, promoter AJ has been privileged to have some of his favorite DJ’s play at DSD with each helping to keep the night fresh and exciting. DSD is where the DJ can play the music they truly love.  Guest DJs on the DSD guest DJ rota this season include Hifi Sean, Paul Coals, Dave Kendrick, Maze & Masters,  Ali & Affy Go Bang, Zach Burns, Chris Brogan, Severino and Pier Morrocco. They are part of the our Dirty Sunset Disco family and clubbing wouldn’t be the same without them.

When Paul Coals first graced the DSD decks back in July 2011 we just knew we were onto something good, something real good. Having carved a distinguished career behind the decks for many years on London’s diverse music and club scene, Mr. Coals has gone on to wow with gigs around the globe including Sydney Mardi Gras 2012, Salvation vs. Scream in Paris and across Ibiza at Space, Pacha, Cafe Mambo, Bora Bora and Hotel Es Vive. Jetsetting with a grin and a record bag filled with dancefloor treasures has ensured him many, many admirers as he continues to deliver his unique groove of deep, progressive tech house. Paul enjoys residencies at Salvation, Revolver and Barcode Vauxhall and is a welcome addition to the guest DJ rota at clubs includingA:M, Orange, Beyond Afterhours, Matinee, The Gallery, Love Muscle, XXL London, MegaWoof, Revolver, WildweXel, Bear Necessity and Scandal. Add his service to some of the UK’s legendary festivals, such as Lovebox, Brighton Pride and Summer Rites and you begin to understand the appreciation house heads have for Paul Coals. He is one of DSD’s favourites and after just one listen, he’s bound to become one of yours. Facebook 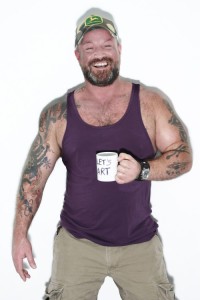 Oh to wax lyrical about Hifi Sean. Can there be a better way to spend our time? We think not. He is simply one of the UK’s finest DJs, producers and remixers. End of. He doesn’t just play records; he fuels them with passion that infects every dancefloor he plays to. And he’s played to them all. DTPM, RAW, Hustlaball, Kinky Trade, Beyond, Orange, Rebel, Wild Fruit, Barcode, Bear Necessity and many more including international DJ sets in the U.S.A, Italy, Holland, Spain, Greece, France, Germany and Australia.  A Bear festival can’t happen without his soundtrack, a Pride doesn’t feel right without his tunes. Oh yes…those tunes of his. Sean’s trademark sound has taken the classic and made it new again, the upfront an instant classic. From Mantronix to Janet Jackson via Faith Evans to Loleatta Holloway, everyone wants to feel his magic booty touch, whilst his remixes always demand attention. Add the 30,000 people who have subscribed to his monthly iTunes Podcast Hifi Sean Psychedelic House Music and you begin to get just how beloved this DJ is by clubbers . Join Sean at DSD this summer and see why this Dirty Sunset Disco stalwart has us smitten.  Web.

Dave Kendrick is the co-founder of legendary east end knees up Macho City, a manly disco institution in the Shoreditch fashion belt, dropping Hi-NRG bombs, Chicago trackness and proto house that went boom to a local crowd of brilliant eccentrics at a place they could call home every Thursday night. He was resident at Manchester’s seminal Hacienda playing Paul Cons’ infamous Flesh nights and presided over Saturday nights Freak having gained dancefloor notoriety at Manchester’s Paradise Factory and Wild Fruit way back in the early nineties. Dave has DJed as far and wide as Russia’s Siberia, Canada and Dalston with regular sets at Handsome, Butt Parties, Dalston Superstore, East Bloc, Vogue Fabrics, Paradise 45, Vauxhall’s superfun Carpet Burn & Homoelectric. Dave is everything we love about decent house music. And we can’t wait to get decent and dirty with him at DSD. Mixcloud

Affy and Ali Go Bang are our kind of groove boys having rocked warehouses, festivals, pubs, clubs and country fields across the UK over the last 6 years with their eclectic “anything goes” music policy. As well as running their own quarterly Brighton based warehouse party GoBang! have supported the likes of Horse Meat Disco, Greg Wilson and Norman Jay to name but a few.Genres mean little to them as long as it generates a reason to dance and their love of a decent tune ensures there is never an empty dancefloor when they are on deck duty. If you know about the party scene in Brighton and beyond you know about Go Bang as their Green Door, Globe, Nova, Vintage, Danceteria, Lost & Found, Queen of Hoxton, Audio, Disco Deviant, Sticky Mikes, House of Go Bang Warehouse Parties and Calabash ventures prove. Oh yes Calabash – the must head to tent at Brighton Pride festival in Preston Park affirms our belief in their taste in tunes. Rammed to the canvas rafters with smiling faces to a happy bass, Calabash at Brighton Pride has to be experienced to be believed. Affy and Ali – deliverers of the decent groove to the decent of Brighton. Be it with house of the deep, jackin’, New York kind or disco of the delicious type, they tick all our clubbing boxes. With Go Bang’s groove based music around it is always time to dance. Website

2014 marks Pier Morrocco’s 20th year of professional DJing, ever since he joined the ranks of Trade at Turnmills, way back in 1994! Since then he has spun his unique blend of feel good house music to many thousands of clubbers across the globe. Whether it be vocal-led or more percussion based, Pier always generates a carnival atmosphere with his DJ sets, delivering a warmth and inclusion that has led to his reputation as a stalwart of the London gay scene. Pier is currently a resident at London’s Barcode, but is best known for his involvement with the infamous club brand Salvation. His years of DJ experience, enthusiasm and knowledge of how to take a dancefloor on an unforgettable journey guarantees we are in for a sensational summer and we are thrilled Pier will be playing at DSD Higher, our unique Sunday parties at Club Revenge’s Roof Terrace. Facebook  Podomatic

Zach Burns emerged onto the London gay scene summer 2010 with an energetic and uplifting sound of circuit and funky vocal house. An award winning wonder, he has been crowned Best Club DJ for 2 years running in the Boyz Magazine Scene awards, Zach has enjoyed residencies in London over the years including Popcorn at Heaven, Society, Beyond, Orange, International Papa Party, Brazil’s The Week, Paris’ Scream, Berlin’s GMF, Dublin’s Profile and Zurich’s Heaven. The past year has seen Zach delve into his favoured deeper, tech house and nu-disco side, both on the decks and on his weekly Get Deeper mixes for Gaydio and he can’t wait to continue to do so at DSD. A DJ that’s a joy to play with Zach looks set to give DSD plenty of thrills this summer. Web Soundcloud