Posted on April 15, 2014 by dirtysunsetdisco 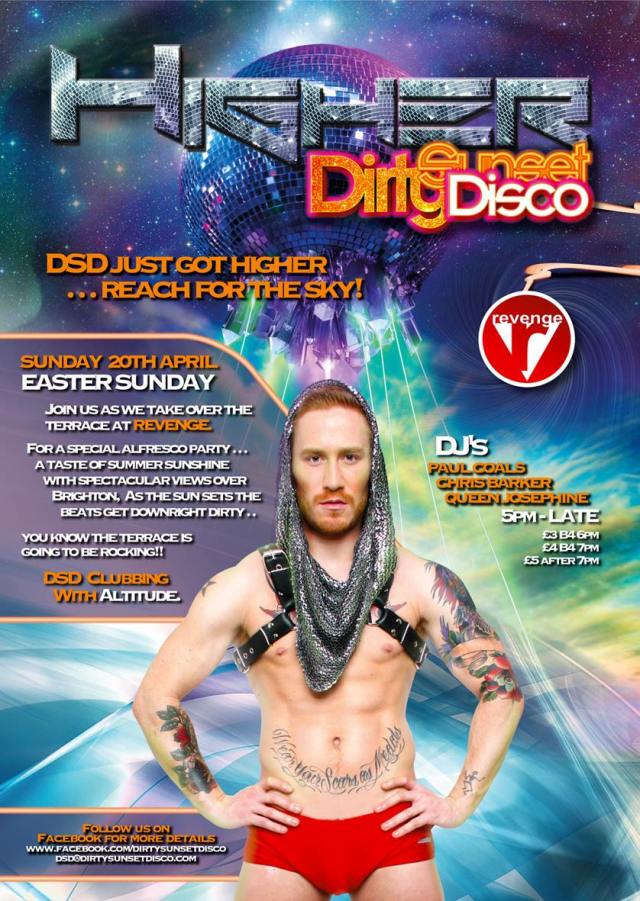 It’s time to get excited, it’s time to get DSD back into your life. Yes it’s time to get Higher. This Easter Sunday DSD is taking over the terrace at Club Revenge for a special alfresco pop-up party. Expect an evening of summer sunshine, spectacular views across Brighton and, as the sun sets, some downright dirty beats – DSD style. Soundtracking your Dirty Sunset Disco clubbing with altitude will be special guest DJ Paul Coals (Salvation / Barcode) and our DSD residents Mister Barker and HRH Queen Josephine.

Its gonna be a Bank Holiday party like no other as DSD rocks the Club Revenge terrace with a mix of glorious sunshine disco, house and dirty sunset beats. This Easter it’s time to reach for the sky and get Higher with Dirty Sunset Disco. See you on the terrace party people.

Follow us on Facebook for more Higher details and news of our exciting 2014 summer season launch at Ohso Social in May. www.facebook.com/dirtysunsetdisco

DSD is Brighton's favourite Dirty Sunset Disco delivering celestial clubbing to re-energise your aurora and spark up the weekend. Filled with a mixed metrosexual good-time crowd with altitude, dancing to a soundtrack of disco fused house and grooves, DSD is everything you'd expect from a night out in saucy Brighton. Delight in its attitude free clubbing and balearic vibe. One of Brighton's best, DSD has naughty intentions that will regenerate your faith in clubbing. DSD: Fire-up your thrusters, get on board and party. The future of clubbing has landed.
View all posts by dirtysunsetdisco →
This entry was posted in Forthcoming Parties and tagged Brighton, Club Revenge, Dirty Sunset Disco, DSD, Mister Barker, Paul Coals, Queen Josephine. Bookmark the permalink.