Posted on August 30, 2013 by dirtysunsetdisco 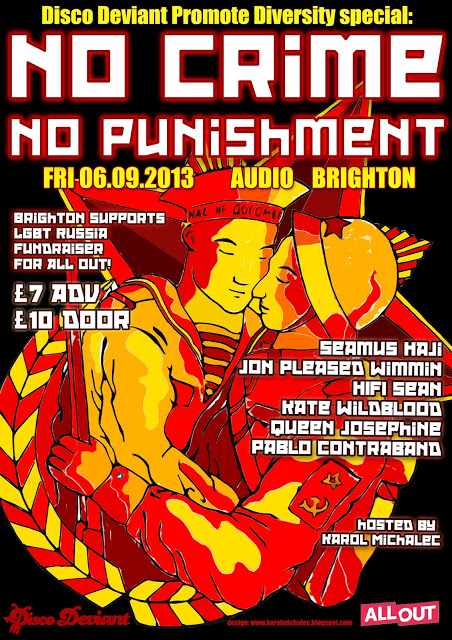 Here at DSD we are always up for doing the decent thing. For Brighton clubland and DJs to join together and make a difference. Which is why on Friday 6th September we will be supporting Disco Deviant Promote Diversity Special: No Crime No Punishment at Brighton’s Audio. Every day brings more disgust to our hearts as we read with despair about the appalling situation the LGBT community in Russia are facing.  Disco Deviant’s latest venture alongside Brighton Supports LGBT Russia aims to raise awareness and much needed funds for the campaigning organisation All Out. And boy are they doing with some style as DJs Jon Pleased Wimmin, Seamus Haji, Pablo Contraband, Kate Wildblood and DSD’s very own disco darlings Hifi Sean and Queen Josephine play for your pleasure.

Tickets are £7 advance / £10 on the door. Grab them online, at Brighton’s Resident Records or at our Summer Season Closing Party tonight at Ohso Social Bar. Just grab the very Disco Deviant host Karol Michalec to purchase your ticket and show your support.  DSD. Supporting Disco Deviant and saying nyet to homophobia.

Disco Deviant Promoting Diversity No Crime No Punishment on Facebook

DSD is Brighton's favourite Dirty Sunset Disco delivering celestial clubbing to re-energise your aurora and spark up the weekend. Filled with a mixed metrosexual good-time crowd with altitude, dancing to a soundtrack of disco fused house and grooves, DSD is everything you'd expect from a night out in saucy Brighton. Delight in its attitude free clubbing and balearic vibe. One of Brighton's best, DSD has naughty intentions that will regenerate your faith in clubbing. DSD: Fire-up your thrusters, get on board and party. The future of clubbing has landed.
View all posts by dirtysunsetdisco →
This entry was posted in Uncategorized. Bookmark the permalink.